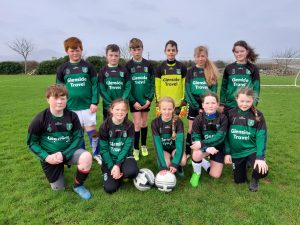 A great win away to Listowel in a league match last Sunday morning. In horrendous weather conditions, our team who were short a few, gave an excellent display to win 3-1. It was 2 nil at half time, our scorers being Peter McCarthy and Chris Murphy, this after playing against the gale force wind and hailstones. In the second half both teams scored 1 each, Listowel scoring from a penalty first to put the game into the melting pot but Oisin O’Brien finished the game as a contest with a few minutes to go.

What a game this one was last Friday night in Tralee with both teams eyeing top spot in the league. We started quite poorly which was our downfall in the end and by early in second half Park were 3-0 up. We had conceded in the first minute and a total clanger by us later in the half gave them a 2 goal lead at the break. The Park added a third in the 55th minute but from here we upped our game, came back to 3-2 and had the Park under serious pressure, the two goals by Eddie Stack and Liam Tobin. Park scored next but our fellas didn’t give up and  drove on again. We got it back to 4-3 from a penalty by Dara Heim but soon after the ref blew up.We were disappointed with the result as we felt harshly done by a number of goals that went in against us but not to be. Overall, though the result didn’t go our way, we were very happy with how the team played again both in terms of effort put in on the night and the skills of the game. 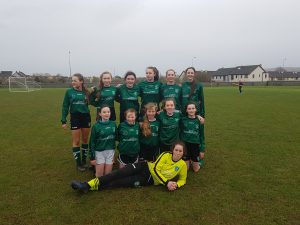 We started this game on Saturday with 10 players as we were missing 4 of our regular starters. We had to call Grace Reilly and Grace O’Dowd from the U12s to make up the numbers. These girls were exceptional and we really appreciate the effort they made in the game. We were under pressure at the beginning of the game and our keeper Muireann O’Brien had to make some good saves. We settled in though and got some good possession and when one of our girls was knocked over in the box we were awarded a penalty after 20 mins. Katie Hussey stood up to take it and scored. We held our lead for the rest of the game playing our hearts out against a much older and stronger Park team. Our team has made huge improvements over the season and the team spirit and effort they put in to every game is fantastic.

A disappointing effort by the 14s in the Cup last week ended up with a 7 nil defeat. we were second best all through and can’t have any qualms about the result. Best for us were Billy Doyle, Tomas Godley and Gearoid O’Connor who tried their hearts out all through.

Our U12B team lost out to Killarney Celtic last Saturday in a windy Fenit. The scoreline did not do the team justice as we more than held our own for many periods of the game. We were short quite a lot of players and of the 11 players we had at our disposal 6 were girls who were easily the equal of the boys from both teams. Peter O’Mahony in goals was superb in his first game in that position. In front of him Riona Moriarty, Cara Kelly, Charlotte Stack and Emily Rose Murphy kept a good line throughout and got a lot of blocks in. In midfield Seanie Jeffers, Luke O’Brien, Meah Carmody and Grace Reilly ran their legs off and up top Sean Daly and Se O’Neill were a threat all day. We had a lot of pressure in the second half from which we scored near the end, a free by Seanie Jeffers. Well done to all involved.