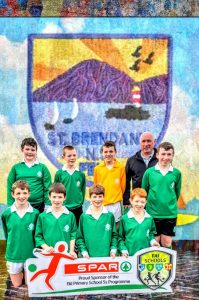 Great performances were given by our local National School (St. Brendan’s N.S. Fenit) at the SPAR FAI Schools Soccer Blitz last Thursday. Fenit N.S.won the competition and played some outstanding soccer along the way and are now through to the county final. Samphires Jayden ,Tom, Alex and Billy all made telling contributions but well done to all the players and to their teacher Mr. O’Connell.

The seniors got a good point away to Killarney Athletic last Sunday morning. Athletic were on top for the first quarter and went 1 up. We started to come back into it after this but it was still 1 nil at half-time. We took control for the first 30 minutes of the second half and went into a 2-1 lead with goals from Ryan Dolan and .Ferdia O’Brien. Athletic responded and for the last 15 minutes we were under the cosh and conceded from a free with 5 to go leaving it 2 all at the end. Chick Foley, Sean Allen and David O’Sullivan among others had excellent games for us.

Our under 16 girls were at home to Listowel on Saturday. Listowel are top of the league and have some exceptional players. We were well beaten on the day by a very good team. The one positive thing to be taken from this game is that our girls never dropped their heads and kept playing their best until the final whistle. Best for us on the day were Katie Dwyer and Clara O’Dowd. 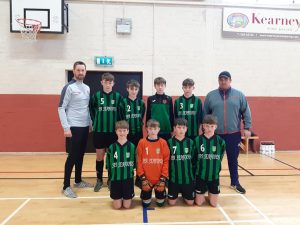 We travelled to Duagh last Sunday for the Kerry Community Games competition. We played 4 games in all winning 2 and losing 2. We were quite competitive throughout and the lads gave their all, so well done to them and to all involved

Our U12 girls are down to their last 4 matches of the season and we played MEK at home last Saturday in a must win game. We had a very strong squad of 15 to choose from. The girls were absolutely outstanding and each one of them should be so proud of their work rate and determination. In the first half we were constantly pushing forward and always threatening. We finally broke the deadlock 18 mins in and 6 minutes later were 2 up. The 2nd half was much the same but MEK never gave up and 10 minutes in were unlucky not to score. We started to press again and got 2 goals in quick succession which ended the game as a contest. MEK hit back with a lovely goal but we saw the game out with a 5th.  Goalie Anna  was outstanding behind Cara, Charlotte, Sarah, Riona and Emily Rose in defence. Ciara, Mia and May T were always attacking with Alisha, Ashling, Grace, Katelyn, Saoirse excellent in midfield. Heather playing along side Rebecca both had maybe their best games yet. Girl of the match Charlotte Stack.