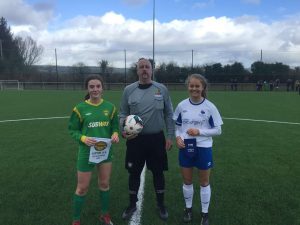 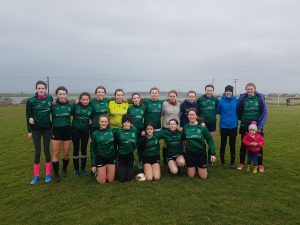 Well done again to the seniors who won again in the cup against following the victory over MEK the previous week. Another good showing by the team after a poor start to the game where we conceded early. David O’Sullivan equalised for us before half-time and 2 more from Fiachra Dunne and Chris Murphy gave us the win.

We played a home game on Saturday 7 March in typical winter conditions with strong wind and occasional showers.  Our opposition was Inter Kenmare, who are in the top half of the league table. Both teams struggled to pass the ball due to the strong wind but it was Kenmare who tested our goalkeeper on a few occasions from long range although each time our defenders managed to block the shots and Grace Stack in goals made some great saves. 5 mins before half time, we conceded a goal after we failed to clear the ball from a corner kick. In the second half Samphires tried to score an equalizer and we came very close on a  couple of occasions – Lana’s shot was blocked and Lilly’s follow up rebound was fingertip saved by Kenmare’s goalkeeper. As we pushed players forward, we conceded another goal from a rebound after another good save by our goalkeeper. We had 17 players available for this game and it’s great to see the enthusiasm and effort put in by all the girls in the team, with skill levels appreciated by coaches and parents.

With both teams very evenly matched, we were the better side in the 1st half, Billy Walsh latched onto a very poor back pass across the 6 yard box and scored into open net. 1-0 halftime. Dingle scored about 7-8 minutes into half, their player went through 4 of our lads in the box and put it away. Alex Mc Grath made it 2-1 5 minutes later after a brilliant through ball by Billy Doyle. Billy Walsh scored his second with a brilliant curl to left corner five minutes after that. Ethan Gaisey hit the upright just after that from the edge of box. Dingle pushed on, scored off a free from a rebound. A similar goal followed again a few minutes later, 3-3, all momentum with Dingle . Scored their 4th five minutes from time off a counter attack when we had pushed on. Best for us : Cian O’Gara, Ethan Gaisey, Billy Walsh Billy Doyle and Gearoid O’Connor.

Well done to both our teams who served up a feast of football last week in the cup with our A team edging it in the end on a score of 2 nil.