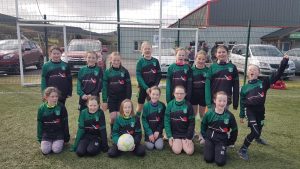 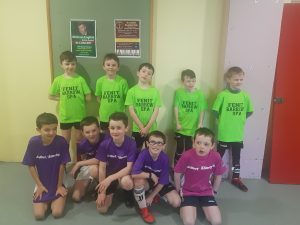 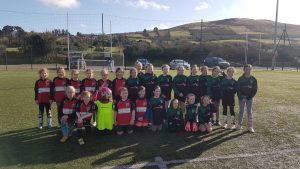 Seniors: Samphires 2 v 0 MEK Galaxy  (Greyhound Bar Cup) (Scorers: Conor Lowe, Ger McCarthy)
Well done to the Seniors who got an big win against MEK Galaxy in the cup. Our scorers were Conor Lowe and Ger McCarthy
U12 Boys Div 1
Samphires 0 v 4 Castleisland
Under lights in Castleisland last Tuesday we lost to a better Castleisland side on the night. We were the team on the front foot in the first 20 minutes but we faced a solid defence and struggled to pass through them. The weather probably did not help with a couple of sleet showers forcing the match to temporarily delayed. Too many players were trying to beat men instead of passing and moving and because of this we created few chances. Neither did Castleisland who were happy to try and hit us on the break. Half-time was 0-0.
2nd half Castleisland had the wind at their backs but we continued to force the issue but without creating chances. Castleisland then hit us on the break to go one up. We pushed forward but left ourselves open to the counter attack and Castleisland scored two more. In the last few minutes a defensive lapse led to the fourth. Lots of effort and work rate but we were slow on the ball and deserved little from the game. Best on the night was Paddy Hanafin who saved a number of goals with last ditch tackles in the 2nd half.
Girls U10s:
Well done to the U10 girls on Sunday on a fantastic performance in a friendly v Camp. All the hard work in training is paying off.
Community Games: While the weather meant another disrupted weekend its was still a busy one for Fenit Samphires players who represented their parishes in the indoor soccer community games over the weekend. First up were the U13 girls on Saturday. They played really well in the first two group games and it came down to the final game v Ballyduff to decide who would go through to semi. They gave their all and just lost out to a 2 to 1 scoreline. Some great performances all round.
On Sunday the U10s boys were on. Both Fenit/Spa/Barrow and Ardfert/Kilmoyley teams had a strong Samphires contingent. Both teams avoided each other in the draw which was a good thing! Both teams again acquitted themselves really well with Ardfert coming closest to qualifying. But overall a great effort from all the players.