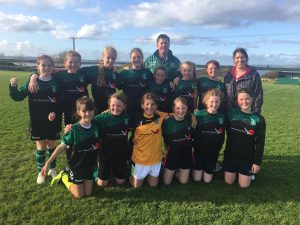 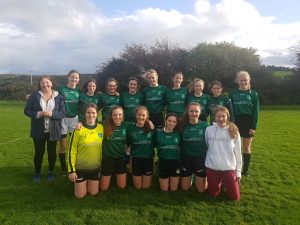 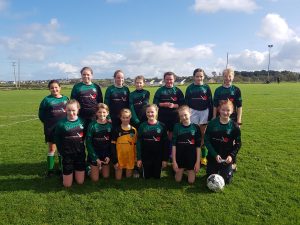 U17s Girls
The u17s travelled to Listowel in the league and we were slow to get into the game and were punished when Listowel scored an early goal. From then on we matched a strong Listowel team and drew level with a fine individual effort from Paula Holmes. Listowel were a constant threat and scored two goals in quick succession to leave it 3 1 at half time. We created a good few scoring chances in the 2nd half and with a bit more confidence in front of goal we could have scored a couple more. Listowel pulled away in the 2nd half as we began to tire. Some good things to take from the game especially the performance of new players Lara Flynn, Ellen Cooke, Katie O Leary, Jade Harkin and Paula Holmes.
U15s Boys: Ratoo Rovers 2 v 2 Samphires (Scorer Alex McGrath (2))
Another good performance fro our lads who came from behind twice away to Ratoo. Alex McGrath was the hero who got both our goals. Some others who performed well were Tomás Godley, Luke Casey and Oisín McGibney.
U13 Girls Premier
Outstanding team performance and the work rate in the 2nd half was a joy. Scorers Elisha Deady 2 Miah Carmody 1. Overall very satisfied with the team. Girls of the match were corner back and captain Heather McCann and midfielders Riona and Miah.
U13 Girls Division 1
The u13 Green team played their first home game of the season against Killarney Celtic Gold. As with last week we took a while to get into the game and the Killarney team had pulled away when we got up to speed. Agaim a much betger 2nd half and Siofra Murphy was on the scoresheet again for 2nd week running. Great display from our defence with Aoife Moyihan and Erin Tuite in particular having strong performances.
U13s Boys: LB Rovers 4 v 1 Samphires (Scorer Kealan O’Dowd)
The 13s gat a taste of reality last Saturday away in Ballybunion against a good LB Rovers team who were operating at a pace that stretched us throughout. We took the lead in the first half through Kealen after good work from Aaron. We struggled in the second half though as we took too long on the ball and lost our shape at times leading to gaps defensively which were punished. Our lads did compete well for the whole match and it was in the balance until 10 minutes to go when LB scored their 3rd. They added a 4th in  after this as we pushed on to try to get a goal back. Jack Dwyer in goals and Tom Quilter in midfield were 2 of our better performers on thew day.
U11 Boys: Fenit vs Camp
Fenit U11’s took on Camp in two 4 x 15 minutes matches in Samphire Park on Saturday. Camp provided two strong teams and both matches were evenly contested with great skill and determination by both sides.
Best for Fenit in match one were Dara Harty, Austin Donnellan and Conor Nolan in goals.Best for Fenit in in match two were Diarmuid Murphy, Cillian Foley and Gavin Deasy. But all players should take great heart form the improvements being shown and it bodes well for the months ahead.