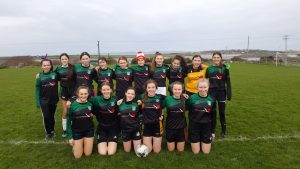 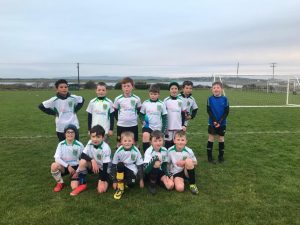 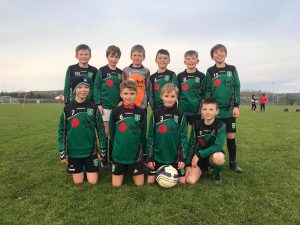 Boys U18s: Killarney Celtic 8 v 1 Samphires
The 18s lost last weekend 8-1 away to Killarney Celtic in the league. It was 2 nil at the half but we lost our way in the 2nd half and conceded a further 6 with a lack of attention to our defensive side of the game a cause for concern.
Boys U16s: Tralee Dynamos 10 v 1 Samphires (Scorer Ben Donnellan)
The 16s had a heavy defeat away to Dynamos last Sunday in a game where we never got going. We were 2 down after a 10 minutes and our lads never rallied. We hope to see a big improvement for the next game.
Girls U15 Samphires 0 v 5 Dingle Bay Rovers
Fenit Samphires played Dingle  Bay Rovers in Fenit. We had 17 players available for this game and everyone had some game time. Final result was 0:5 (0:1 HT). Samphires had few scoring chances but Dingle goalkeeper was in great form. Well done to team for putting good effort and to 2 new players who played their very first game for Samphires – Darcy & Kate.
U12 A’s St Brendan’s Park 2 Samphires 5
This was the U12A’s best performance this season against a previously unbeaten Park team. After an even first 10 minutes , we scored first with a fine goal by Mikey Corridon after a mazy run around the Park defence. We doubled our lead again shortly afterwards after some fine work from Michael O’Sullivan led to Mikey Corridon scoring again with a looped effort. Fenit were rampant at this stage and we scored a third with a lucky goal from Dara Harty when a long range free nestled in the top corner. Shortly afterwards Robert O’Shea stepped up from defence and scored a fine left foot effort into the top corner again. We played some lovely football in the first half and deserved to go in at half-time albeit 4-0 was a little generous. Into the second half we scored via Michael O’Sullivan after good work and cross from Conor McGibney. Park are a fine team however and started to put us under pressure in the 2nd half. They scored after a fine passing move and started to create a few chances as our midfield tired a little. Our defence held up though and despite another fine goal from Park we held out and should have scored another ourselves. Overall a great performance in a quality game which opens up the entire league – best performer was Robert O’Shea at left back although all of the team deserve credit.
U12B’s Mastergeeha 2 Fenit 1
A disappointing result after a number of good victories in this league. We started too slowly and our passing and movement was sloppy. Mastergeeha took the league after a shot was parried out and the Mastergeeha striker was on hand to prod it home. We pushed on and had a number of chances to equalise but either took too many touches or overran the ball on occasions. At half-time we made a few positional switches and tried to put some pressure on the home team. We conceded almost immediately after the restart which put us on the back foot. We didn’t wilt though and continued to put on the pressure and were rewarded with a goal from Alan O’Connor. We still had a number of chances to equalise but couldn’t get that 2nd goal. Great effort from all but we need to work on passing quicker and reducing the amount of time we spend dwelling on the ball.
Best for Fenit were Danny Gazi and Fionn McGuire. Team needs to keep positive as they are still in the hunt for the league. Man of the match: Alan O’Connor with a wonderfully finished goal and tireless work in the middle of the field.
Boys U10s
The Boys u10s played Castleisland on a cool but calm Saturday afternoon in Samphire Park. We fielded three teams of u10s and u9s and all played great and enjoyed the day. Thanks to Castleisland for travelling and we look forward to return matches.