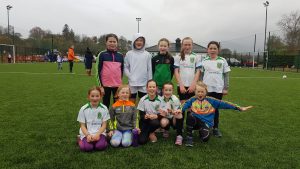 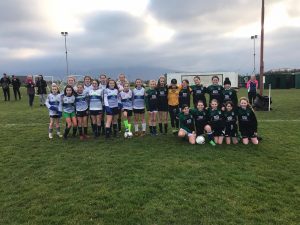 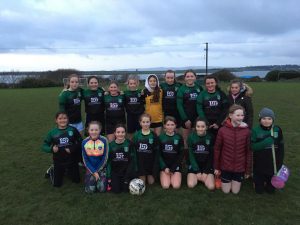 Busy weekend for Fenit Samphires Girls Teams this weekend with both U13 teams playing at home and our U17s/U15 and U10s involved in practice matches in Dingle and Killarney. Also three girls played girls played with the U13 boys. 2 Boys U13 teams plus 17s Boys and of course the seniors played. Thanks too to referee Tom O’Sullivan who reffed all the 5 matches in our pitch last Saturday from 10.30 to 5 o’clock.

After a very good first half the seniors lost their way and were soundly beaten away to Killarney Ath last Sunday. Unlucky to be down 1 nil after a good first half performance, we conceded 4 after the break, scoring only 1 ourselves through a Ger McCarthy penalty after he was taken down in the box. Best for us was Ryan Downey.

A good effort by the Boys U17s who were extremely unlucky to lose out a closely fought encounter against Ballyheigue. The score went both ways and it was a deflected shot that decided the game with 15 mins to go with both teams creating chances in an absorbing contest. Great to see the 17s putting up such a good performance after a slow enough start to the season. great also to see the number of players who played all of whom did very well.

We hosted Killarney Celtic last Saturday and though the scoreline doesn’t make for good reading, the team played well in possession but were caught out at times defensively. We conceded another 3 before the half but had chances of our own but we failed to convert. Aaron Harty was a threat all the time and Jack Nolan had a stormer in midfield with Cian McKenna quite creative throughout. Jayden Deady, Jack McCarthy ad Dominick Regan at the back did an awful lot right. Both teams got 1 each in the second half to leave it 5-1 at the end.

Well done to the 13B team who continue to improve and this game could have finished 2 all as easily as 3-1, though we would have to admit LB had a small bit more of the play. Jake Clifford in goals was assured throughout, Sean Power and Seanie Jeffers at the back were outstanding and Peter O’Mahony in midfield won a lot of possession for us. Alex Tuite up front was threatening when he got on the ball, playing quite a number of clever passes. Thanks too to the U12s who helped us plus the 3 girls who strengthened the team. Keep it up lads.

The U13 Green team had their first win of the season at home against Ballyheigue on Saturday evening. These girls have had a tough start to the season and their hard work paid off on the day. This win was built on a strong defensive performance and a very high work rate all over the pitch. The goals were scored by Grace Reilly and Siofra Murphy (2)  who was a constant threat to the Ballyheigue defence all day. Well done all!!

As there has been a long break between games for the U17 girls a practice match was organised with Dingle Bay Rovers on Saturday. This was the girls first trip out west and thanks to Dingle Bay Rovers for facilitating us and being great hosts.

Our U10 Girls travelled to Killarney Athletic on Sunday afternoon. They really enjoyed their first outing of the season and did themselves proud…thanks to our hosts.